ICEBERGHOME automatic appliance is intended for household use. Melt water can preserve its vivifying properties for a short period of time (up to 7 days) and looses its biological activity when heated over 40 degree Celsius. That is why such kind of water should be consumed immediately after it has been prepared at temperature 20-25 degree Celsius. To achieve health-improving and vivifying effect one should consume 500-700 milliliter of pristine melt water daily.

Proposed ICEBERGHOME appliance is an automatic system, with 2000 milliliter of melt water daily production capacity; that quantity is enough for a 3-4 members family. Specially developed program is providing step-by-step melt water production process, including four stages with copying of all melt water formation criteria in natural conditions. The appliance is operating automatically without necessity of any human service involvement. Any kind of water is appropriate for drinking melt water production (tap or bottled water). The most optimal operation cycle of appliance is 24 hours, but it is possible to decrease operation cycle duration up to 20 hours (for example, in case of necessity to produce melt water before time indicated on timer).

One of the vital stages of melt water production is it’s “memory” removing process.
That operation is necessary to delete on cluster level all negative traces of harmful chemical elements and compounds for further production of “relict water” after the productive cycle completion with all properties of intracellular liquid. The memory removal process in ICEBERGHOME appliances goes with the help of ultrasonic cavitation with certain parameters. Water processing with ultrasonic waves is eliminating all negative information carriers, preparing water for structuring.

It is well-known that molecule of water consists of two atoms of hydrogen and one atom of oxygen (H2O). But any kind of water (drinking water, also) contains so-called “heavy water”, which instead of two atoms of hydrogen has two atoms of deuterium (heavy hydrogen). Heavy water (deuterium oxide) chemical formula is D2O. One ton of tap water contains about 150 gram of D2O. Notwithstanding its minor quantity, heavy water influences living cells highly negatively. That is why the deuterium oxide removal is very important for melt water production.
The heavy water freezing temperature is a little higher, than that for usual water, and is about +3.8 °C. Thus by freezing of the whole water volume heavy water will freeze first, forming thin ice-crust on vessel walls.

Stage 3. Elimination of impurities from water.

Further water freezing process leads to impurities displacement from the ice crystals formation front and their concentration in “brine” form. The freezing temperature of such “brine” is lower then the fresh water freezing point. That is why the brine remains liquid, while fresh water has already turned into ice. After elimination of impurities and deuterium oxide, ultimate pure fresh water remains in solid state (ice). Formed ice is ready for production of final product – melt water.
Freezing process is accompanied by water molecules crystallizing with further turning into structured ice, with continuous movement inside of water crystals. The crystals comprise thin tubes which circulation, similar to the circulation of living liquids in cells of organisms and stalks of plants. The longer life of every crystal is, the more similar to living liquids of human body it becomes. Cells of babies and animals are containing the certain manner structured water. While looking at it through microscope with magnification 20000x one can see its structure similar to snowflake. Such water is called “clustered”. It powerful rehabilitation effect was proved: that water remove toxins from human’s body cells with significant slowing down of ageing processes.

The water transformation from solid into liquid state (melting) making possible biologically active drinking water production, with ordered structure similar to ice and unique recovering features.
Melt water has the so-called “structure memory” and keeps this property up to 7 days; with further turning to usual purified water. All stages of melt water production (de-structuring, freezing, purifying and melting) should follow certain strict time and temperature scheme, repeating the process of natural melt water formation. Too fast freezing will prevent from heavy water and harmful impurities removal. Too fast melting will bring the process of water structuring to failure, with narrowing down of water biological activity properties.
The percent ratio of produced melt water to initial water volume is 50-70%, the full cycle of melt water production takes from 20 to 24 hours.

The Iceberg model range comprises 4 standard sizes: ICEBERGHOME (for 4 persons), ICEBERGCOTTAGE (for 20 persons) and ICEBERGHOTEL (for 50 persons) for 4, 20 and 50 persons respectively. The appliances can be used at home and in small hotels. 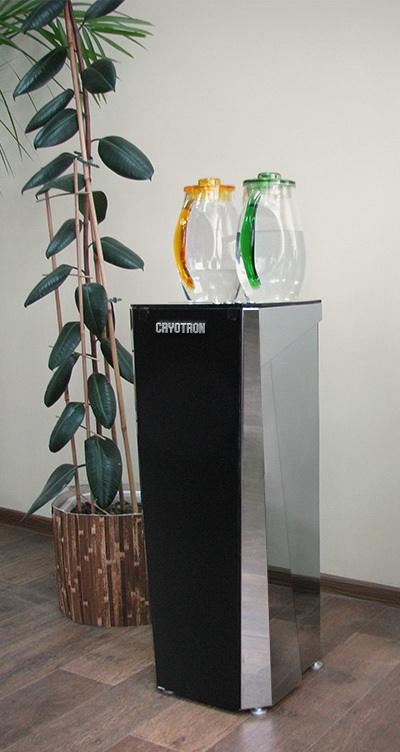 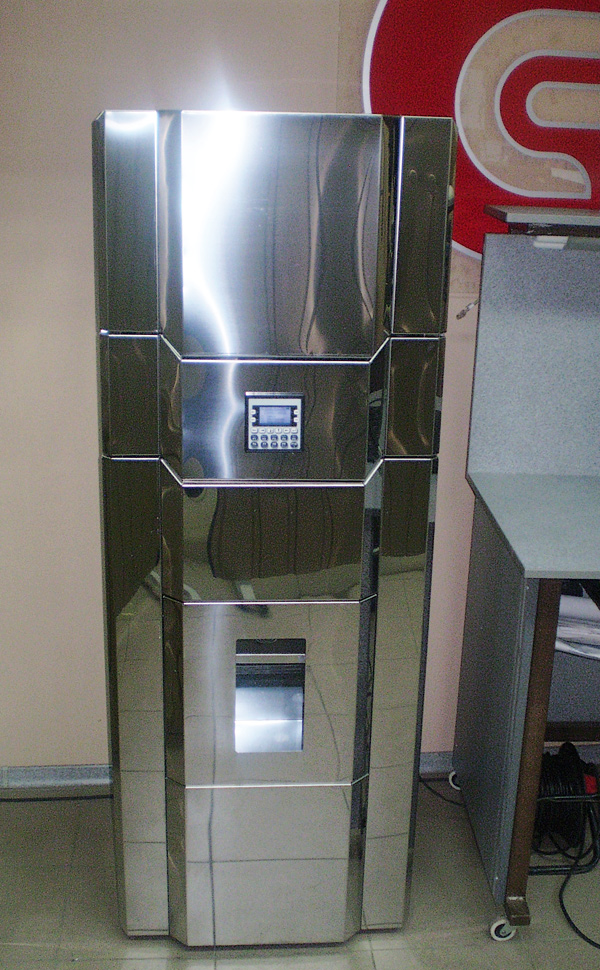 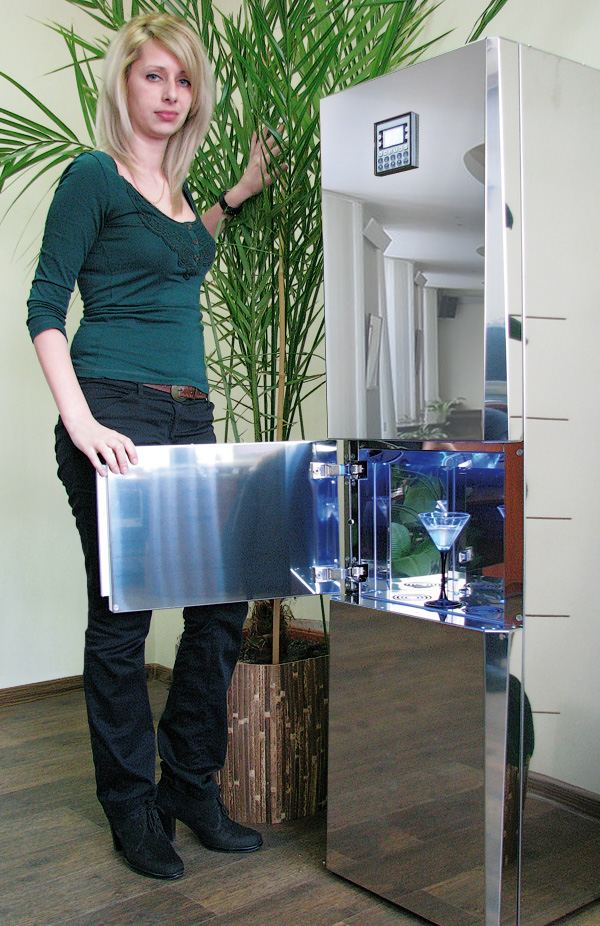